With the 2022 horse racing season officially over after the recent Breeder’s Cup, it’s time to start looking at the 2023 season.

Horse racing fans and bettors alike look forward to the next event on the list for 2023 events. While the UK is preparing for the Cheltenham Races in March 2023, the US is looking to the famous Kentucky Derby held in May 2023.

History Of The Race

The Kentucky Derby is one of the most famous and popular horse racing events held in the US. It’s an annual event held on the first Saturday in May and has been going strong since its inauguration in 1875.

In the US, it’s referred to as “The Most Exciting Two Minutes in Sports.” This refers to the duration of the race and the high stakes involved.

There are 20 horses in the race selected based on their performance and qualifying points gained during the races along the Road to the Kentucky Derby.

This event also has the special Triple Crown award, which can only be won by a horse and jockey that won the three qualifying races in the same year.

These races are the Belmont Stakes, Kentucky Derby, and Preakness Stakes. So far, there have been only 13 horses managing to achieve this trophy.

Forecasts For The 2023 Derby

While this popular racing event is still months away, horse racing fans and bettors are already considering the season favorites. We look at the odds and futures listed and the favorites to win the 2023 season.

It’s too early to have set odds on the racers, especially as the 20 horses participating haven’t been confirmed yet.

This doesn’t mean dedicated bettors and fans haven’t started making futures and bets based on the 2022 results.

The 2022 race winner is the horse Rich Strike, with jockey S. Leon and trainer Eric Reed. However, the odds for the first and second-future pools show that the bets rest on upcoming horses, Forte and Cave Rock.

The odds are currently in favor of Forte, leading as the 10-1 juvenile betting choice. Uncle Mo is the early 4-1 favorite in the sire category. Read this Amwager review for more info on odds and promotions ahead of the race.

Your fifth and sixth pool opportunities fall in March from 10th to 12th and from March 30th to April 1st, 2023.

From the up-and-coming juveniles, Forte is the clear favorite to win. This horse has shown a remarkable performance in the FanDuel Juvenile presented by TAA. He had a perfect ride, winning over Cave Rock with one and a half lengths.

This earned him 30 points, which is used to qualify for the Kentucky Derby. He also received Grade 1 scores in the Hopeful Stakes and the Claiborne Breeders’ Futurity and is one of the most advanced racehorses in his category.

Cave Rock is another favorite to win, finishing just behind Forte in the Juvenile. Another up-and-coming colt, Cave Rock, won two Grade 1 scores at the Runhappy Del Mar Futurity and the American Pharoah Stakes.

Other than Cave Rock, another hopeful is Arabian Knight. This is an Uncle Mo colt with an Equibase Speed Figure of 102, comparable to Forte’s 107 and Cave Rock’s 104 figures.

We enter that period where the preparation for significant events is underway, but the major horse racing events are still months away. However, that doesn’t mean exciting races aren’t happening.

As the entrants compete to gain qualifying points for this popular horse racing event, several must-see races along the Road to the Kentucky Derby are on the horizon. 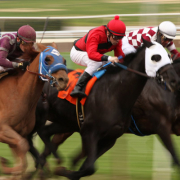 The Experts’ Betting Guide For The 2022 Kentucky Derby

The Top Games That Horse Racing Fans Can Enjoy

This site uses cookies. By continuing to browse the site, you are agreeing to our use of cookies.

We may request cookies to be set on your device. We use cookies to let us know when you visit our websites, how you interact with us, to enrich your user experience, and to customize your relationship with our website.

Click on the different category headings to find out more. You can also change some of your preferences. Note that blocking some types of cookies may impact your experience on our websites and the services we are able to offer.

These cookies are strictly necessary to provide you with services available through our website and to use some of its features.

Because these cookies are strictly necessary to deliver the website, refusing them will have impact how our site functions. You always can block or delete cookies by changing your browser settings and force blocking all cookies on this website. But this will always prompt you to accept/refuse cookies when revisiting our site.

We fully respect if you want to refuse cookies but to avoid asking you again and again kindly allow us to store a cookie for that. You are free to opt out any time or opt in for other cookies to get a better experience. If you refuse cookies we will remove all set cookies in our domain.

We provide you with a list of stored cookies on your computer in our domain so you can check what we stored. Due to security reasons we are not able to show or modify cookies from other domains. You can check these in your browser security settings.

We also use different external services like Google Webfonts, Google Maps, and external Video providers. Since these providers may collect personal data like your IP address we allow you to block them here. Please be aware that this might heavily reduce the functionality and appearance of our site. Changes will take effect once you reload the page.